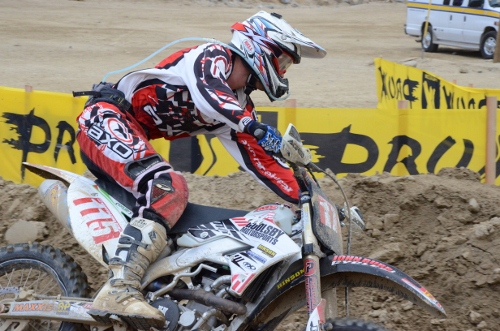 The second gate off the line in Sunday’s race was the Pro 2 class. Pro 2’s have to qualify through Saturday’s A-class program to make it to the big show on Sunday. Glen Helen’s Pro 2 race was filled with talent that included defending Pro 2 Champion Justin Seeds, RPM/KTM riders Ivan Ramirez and Travis Coy; Endurocross star Corey Graffunder, and versatile cross-over rider Justin Jones.

Jones got the holeshot and appeared to be ready to run away with the win, but several riders determined to not make it easy for him over the next 90 minutes.

The best battle of the day took place in the Pro 2 class between Jones and Ramirez, who swapped the lead, good luck and bad throughout the day. In the end it was Jones who prevailed, taking the win by more than a minute over Ramirez (racing on his birthday) who came in a strong second.

“I raced a few of these last year,” said Jones. “I’ve led before but this is the first WORCS race I’ve won and it feels pretty good. I’d like to race the whole season and go for this championship if I can get the funding to get to all the races.”

For his birthday celebration, Ramirez had several family and friends on hand to also help celebrate his podium finish.

“I’d like to thank my sponsors and family and especially my mom for making such great food for my birthday party last night,” said Ramirez on the podium.

Third place fell to Graffunder (who we normally see riding a Husky) who rode a Goolsby Motorsports Kawasaki at WORCS Round one. “I had a stock Husky to ride here, but the frame broke at the foot peg in practice and I had no back-up since my deal with Husky isn’t finalized,” said Graffunder. “So I had a choice of not racing at all or accepting the offer to ride Goolsby’s bike. I’m really grateful they stepped up and had a good machine ready for me to ride.”