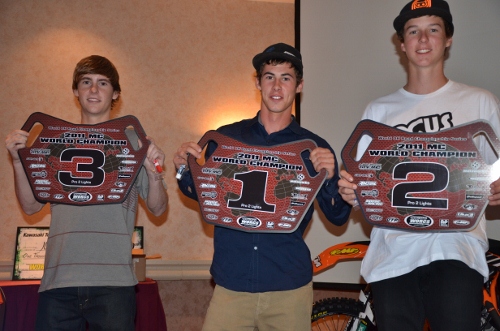 Eric Yorba won the Pro 2 Lights final at round 10, edging out Kevin Wiesbrunch and David Broderick. Evan Kelly clinched the Pro 2 Lights Championship with a fifth place performance to go with his numerous wins and podiums this season. The man closest to him in the title chase, Ty Tremaine put up a good fight but suffered a mechanical problem late in the race and finished 13th for the day and second in the championship.

The premier season of the WORCS Pro 2 Lights was a huge success, with competitors from all over the country taking their shot.

Kelly rode a Yamaha 2-stroke all season, switching back and forth from his YZ250 and his pumped up YZ144 (which started life as a 125). To win the title, Kelly traveled to each of the 10 events, qualified, and then rode every main. He got stronger as the season went on taking his first win at round 5. To take the title Kelly garnered 2 wins and 3 podiums and finished every race for a total of 184 points.

His nearest rival was Ty Tremaine. Tremaine won the season opener, and then had some bad luck in the next two rounds. He rebounded with several podiums in the second half of the season and had a shot at Kelly going into the final, but mechanical problems relegated him to 13th. Still it was an impressive season for Tremaine who finished second in the points chase with 156/1 win.

Third in the title chase went to Steve Gibson with 136/2 wins edging out Eric Yorba with 135/3 wins.