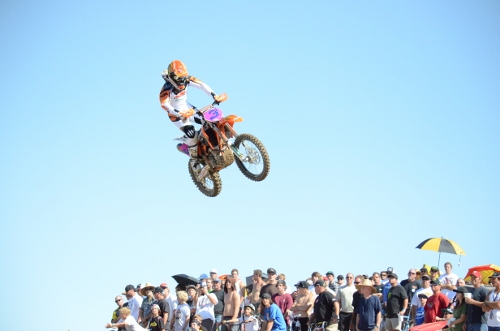 Mike Brown took the holeshot, led every single lap and then took the checkered flag for a perfect ride in Race #1 of WORCS round 9. “It feels great to win, especially here where I won one of my first WORCS races. You always like the tracks where you win,” said Brown. “It’s a good day for FMF/KTM, though I feel badly for my teammate Kurt, but I’m sure he’ll put it together and be on the podium tomorrow. Now, all I have to do is make sure I put in a good race myself tomorrow and go for the overall.”

Taking second was Bobby Garrison on the Maxxis Kawasaki. Garrison gated well and moved up to second early in the race to put in his best performance since his injury earlier this year. “I’m very glad to be back on the podium,” said Garrison, who is one of a small handful of riders to win a WORCS round this season. “I’m feeling better every race and I’m hoping to get back on top of the podium, tomorrow I’ll be going for the overall win.”

Third place fell to privateer Gary Sutherlin for his first WORCS podium of his career. Sutherlin, who works a full-time job during the week and races on weekends is a recent father and was literally racing for diapers. “I’m so stoked to get my first podium, I’ve been trying for years and I’m as surprised as anyone that it happened on this track. It’s a great feeling.”

Justin Soule and Destry Abbott finished fourth and fifth respectively. Defending WORCS Champion and point’s leader Kurt Caselli crashed hard while running second early in the race, broke his clutch lever and powered through the next hour clutch-less for a top ten finish. Last round’s winner Taylor Robert did not race, hospitalized with a stomach ailment, but hopes to compete in Sunday’s 2nd race.