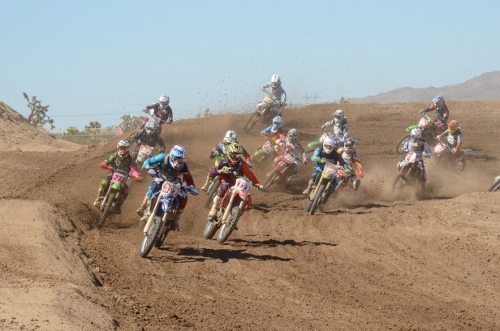 Justin Seeds made a last lap pass to take the Pro 2 victory at WORCS round 9 and in the process wrapped up the Pro 2 Championship with one round still to go. Seeds gated well and made several charges to the front, but also hit the ground a few times. However, he kept getting up and going forward. His perseverance paid off with a last lap pass to take the lead and the victory at the checkered flag. Seeds earned another 25 points for the win which brings his total to 188/3 wins.

Seeds closest competitor in the point’s race, Corey Gruffunder, suffered a DNF at round 9, leaving him with 143/ 2 wins. The 55 point gap is insurmountable which means that Justin Seeds will be the 2011 WORCS Pro 2 Champion.

Taking second was Justin Jones. Jones (who rode his first WORCS race of 2011 just last month with a second place finish at Glen Helen), returned to lead most of the Pro 2 main at round 9. Jones plan to ride fast and consistent paid off well as he led almost every lap, until he bobbled on the white flag and allowed Seeds to get by. A second place finish in this field of riders is another great accomplishment by Jones and we all hope to see him ride the entire series next year.

Third place fell to Travis Coy for his third podium of the season. Coy rode consistently fast all day with a best lap time of 9:53 on his second loop of the course.  Coy’s consistent performance currently has him sitting third in Pro 2 points with 129.