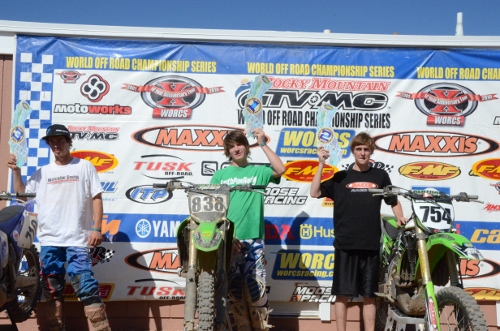 With the WORCS Pro 2 Lites Championship coming down to the wire Brandon Leith made the long trip from Eagle Mountain, Utah to Adelanto, California to serve notice that he will be a contender in the future. The road trip paid off with Lieth’s first WORCS Pro 2 Lites victory of his career. Leith was impressive all day, cutting a 9:58 lap-time on his second go-around, to be one of only two Pro 2 Lites riders to cut a lap under the 10 minute marker.

Lake Havasu’s Steve Gibson put in a good ride as well to take second place. Gibson is a two-time WORCS Pro 2 Lites winner and currently sits third in the points chase. Taking third in Adelanto was point’s leader Evan Kelly. Kelly’s Malcolm Smith/Pro Circuit Yamaha is one of a few two-strokes on the grid. He’s used the YZ250’s power to win two main events and a handful of podiums so far this season. Kelly’s consistency and focus on the WORCS Series has him poised with a strong lead for the title.

With one round remaining Kelly holds a 20 point lead in the Championship with 168/2 wins, ahead of Tremaine with 148/1 win, Steve Gibson 136/2 wins, and Eric Yorba with 110/2 wins. The final battle will be between Kelly and Tremaine on November 6th, 2011, at the WORCS final at Speed World MX in Surprise, Arizona.