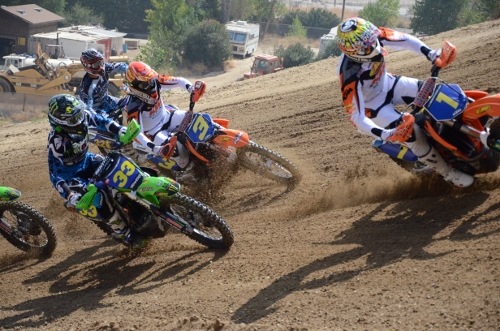 9/24/11: Glen Helen, California: Taylor Robert took the holeshot away from Kurt Caselli and Mike Brown to lead the WORCS all-star field on Day 1 of the 2-day WORCS weekend. Robert, who currently runs second in the points chase for the WORCS Championship held the lead for the next hour and was almost unchallenged all the way to the race 1 victory on Day 1.

“This is a good win,” said Robert. “My luck has been up and down all season, but hopefully I can put together another good race tomorrow and take the overall for this round. I’d like to finish the season with some victories for Monster Energy Kawasaki.”

Behind Robert was Mike Brown who had to battle his way past teammate Caselli earlier in the race. Brownie put on several charges and closed on Robert, but never got within striking distance to attempt a pass. Still, he was happy with the second place slot and hopes to improve his standing on Sunday.

Third fell to Caselli, who has a huge points lead for the WORCS title. Caselli likes to win races, but he likes winning championships more, so he was content to take third today and stay well ahead of Robert for the title.

Bobby Bonds riding a privateer Kawasaki took fourth after battling with Caselli for most of the last ½ hour. He actually got by the 2010 WORCS Champ, but lost the podium slot when he had to pit late in the race. Justin Soule rounded out the top five.

Race #2 and the overall crown for the weekend of WORCS Racing will take place at Glen Helen on Sunday, 9/25/10 with the Pro race dropping the gate at noon.