Robert is Perfect at WORCS 8 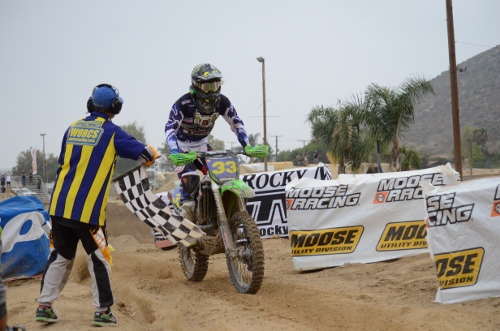 Taylor Robert took the opening race of WORCS round eight by getting the holeshot and leading from gate to checkered flag. Then, he lined up for race #2 this Sunday 9/25/10, took another holeshot, lead for the entire hour and won again for a perfect 1-1 finish for the overall victory.

“This is the best race of my life,” said Robert in the winner’s circle. “This weekend I got the holeshot in both races, never was passed, never was in any trouble, rode my own pace and took the overall after leading every single lap. I’ve had some good luck and some bad this season, but winning like this is really fun.”

Robert was again unchallenged all day and brought his Monster Energy Kawasaki through for his second win of the season and a total of 50 points toward the WORCS Championship.

Taking second with a 2-2 score for the weekend was FMF/KTM’s Mike Brown. Brownie had some fierce battles in race #2, having to work his way past Bobby Garrison and teammate Kurt Caselli for the second overall slot.

“Second overall isn’t bad,” said Brown. “And I’m happy with my results this weekend, though I really wanted to catch Robert and race with him. I always want to win, but if I can’t win then I should be pretty happy with second. It’s another good race for KTM with two bikes on the podium.”

Third place fell to point’s leader Kurt Caselli. Caselli battled race-long with Justin Soule, but came out on top with the final podium spot. Kurt came to Glen Helen with the desire to win, but the good sense to settle for the podium.

“I lost a few points to Robert today,” said Caselli. “But consistency is what wins the WORCS Championship and I’ve got to be smart in these next two rounds and look for opportunities. I want to win races, but I want to win the championship more.”

Justin Soule took fourth overall with 5-4 placing over the weekend just ahead of Bobby Bonds with his best finish of the season in fifth 4-5 placing.