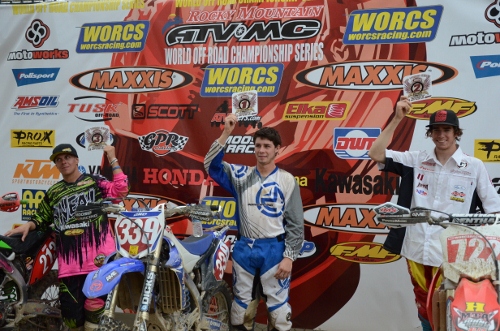 Ross Neely (339) battled his way past Justin Jones and Justin Seeds to take the Pro 2 win. Neely gated well, but found himself playing catch-up to points leader Seeds and the disappearing form of Jones. Seeds took a tumble and allowed Neely past. Then Neely went after Jones cutting an 11:17 lap-time on lap three to take over the lead. From that point on Neely took control and pulled away taking the win by more than 15 seconds ahead of second place.

Taking second was Justin Jones (722) in his first appearance this year at a WORCS race.

Jones got the holeshot and held the lead for two laps before succumbing to Neely’s charge. The long Glen Helen WORCS course was nearly 12 minutes long and Jones cut his fastest lap on lap two with an impressive 11:22. Jones impressed everyone with his performance and proved that if he decided to race the entire WORCS series, he would be a serious threat for the Pro 2 Championship.

Third place fell to Seeds, who recovered from several tumbles on the Worcs-Cross portion of the course. Seeds played the rest of the race smartly, settling for 3rd place points to keep him in the hunt for the WORCS Pro 2 Championship.

Travis Coy took fourth in just his second race after coming back from injury and Kurt Samuelson rounded out the top five.

Justin Seed holds almost a full race lead in the title chase for the WORCs Pro 2 Championship with 163/2 wins ahead of Zip-Ty Husky’s Corey Gruffunder (who finished 8th at Glen Helen) with 143/2 wins. Coy sits third with 109 and Samuelson is fourth in points with 96. Neely, who missed four races early in the season is seventh in the points chase and moving up with 83/1 win.