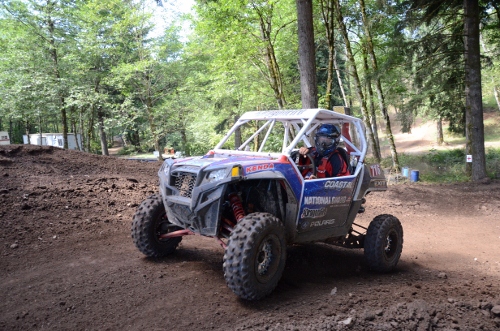 William Yokley took his first WORCS win of the season and extended his points lead at Washougal Washington for WORCS round six. Ryan Piplic took the early lead and looked like a sure bet for the win, but a flat rear tire caused an extended pit stop and Piplic lost a lot of time and positions. He rejoined the race, and managed to come back for a ninth place finish by the flag. Meanwhile Yokley was battling his way to the front where a race-long dog-fight developed between Yokley and Mark Holz. The two drivers exchanged the lead for the rest of the event with Yokley coming out on top for the victory. Holz claimed second place and Yokley’s teammate Scott Kiger took third.

“It was a busy weekend for the National Guard Polaris Coastal Yokley Side by Side Racing team,” said Yokley. “This course is amazing and includes parts of the historic Washougal Pro Motocross course with big jumps, and woods sections in the scenic Washington hills. The 45 minute Side by Side race began with the National Guard Polaris Ranger RZR XP900s running fourth and fifth heading into the woods sections. I overshot a turn and lost several positions, and Scott Kiger worked his way up to second place after two laps. On the last lap, I passed for the lead going into the woods, and was able to stretch it out to get the overall WORCS win of the day. Kiger finished third putting both National Guard machines on the podium.”


Yokley increased his WORCS point lead with the win to 118/1 win ahead of Mark Holz with 98/1 win and Scott Kiger with 74 points.