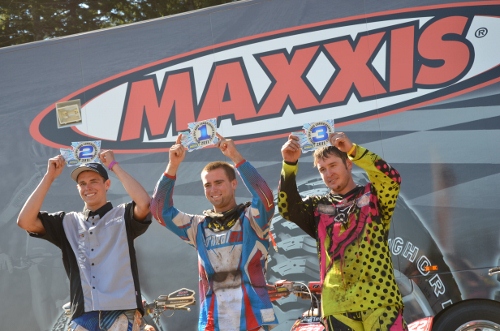 Chase Thomas surprised everyone but himself by taking the lead and the victory at round six of the WORCS ATV Pro-Am Series in Washougal, Washington. Once in the lead Thomas cut the fastest lap of the Pro-Am field on lap four with an impressive 8:51.9. Thomas continued to push himself and his machine for the entire 1 ½ hours of the main event finishing more than 23 second ahead of second place. This is Thomas’s first Pro-Am win of the season, in fact it’s his first podium of the season and the victory moved him up to sixth in the point’s chase for the title.

Taking second was Garrin Fuller. Fuller was coming off back-to-back wins just before the break and was hoping to keep the momentum going. Fuller cut his best time on lap three with an 8.53.6, but he did it without clean air as he battled through some of the dustier sections of the off-road course.

Third place fell to point’s leader Collins Webster. Webster has been the very picture of consistency all season with the exception of one 10th place finish; he has been on the podium every race. With his third place finish at Washougal Webster holds the points lead with a record of 1-2-1-2-10-3 for 125/2 wins.

Webster leads the Pro-Am Championship points chase with 125/2 wins over Mitchell with 113, and Johnson with 109. Fuller is moving up with 98/2 wins and Washougal winner Thomas claims 92/1 win.