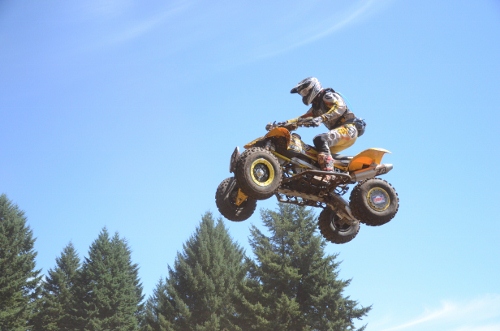 8/21/11, Washougal Washington: We’re going to use the word “toughest” three times – the toughest off road racers in the world took on one of the toughest courses in the US and the toughest rider won at WORCS Pro ATV Round six.

Can-Am’s Josh Frederick has been practicing starts and it showed as he got the first holeshot of his professional career when the gate dropped on the WORCS Pro ATV race in Washington. Frederick was followed by Maxxis’s Beau Barron and Can-Am teammate Jeremie Warnia. Frederick would not hold the lead for long, as Baron quickly made his move a few turns later and took over the lead. This marked the beginning of a 1 ½ hour’s long dog-fight between Frederick and Baron.

Warnia also slipped by Frederick early on but Warnia (suffering from an injured thumb from a qualifying crash) could not hold off his teammate long. The battle became a game of strategy between Baron and Frederick. Baron held the lead, but needed a big gap in order to pit safely and hold the top spot. Frederick needed to close the gap and blast by when the opportunity struck. This is exactly what happened about 45 minutes into the race – when Baron pitted Frederick and Warnia motored past and kicked up enough dust to bury the pyramids.

Baron, undeterred, came back and raced past Warnia and tried to close in the on the brutally fast form of Frederick. But no one was going to catch Frederick this day; when the checkered flag flew it was Josh all the way with Baron taking a well-earned second place and Warnia holding down third.

“I didn’t know I was in the lead,” said Frederick when he got the flag. “That’s why I never backed off; I thought I was in second. So it was a nice surprise when they said I won.”

“I didn’t lose today,” said Baron afterwards. “Josh Frederick just plain beat me and everyone else. But I’m happy with second on my Maxxis tires.”

“This is the toughest race I’ve ever been in,” said Warnia on the podium. “I don’t think anyone could’ve beaten Josh today.”

Frederick’s win gave him a 25 point boost in the standing while point’s leader Warnia garnered 20 for third place. This moved Frederick to 132/2 wins while Warnia still holds the lead with 137/3 wins; Baron is third in the standings with 116.