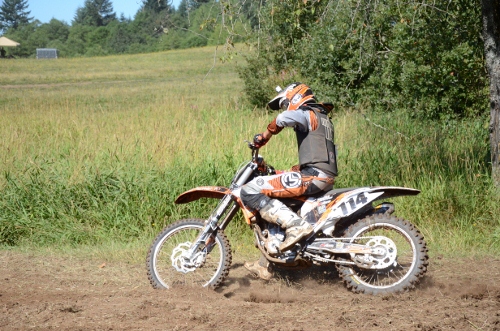 Eric Yorba missed several races in mid-season but is making up for lost time by winning the last two rounds including WORCS seven in Washington. Coming across the line just yards back in second was Devon Watson with Ty Tremaine in third.

Tremaine’s third place finish moved him up into second in the series points just behind Evan Kelly, who finished ninth. After seven rounds and three to go, Kelly leads with 123/1 win, over Tremaine with 120/1 win.

I got in the lead on the second lap and just rode smart for the rest of the race and got the win. This is my second win in a row and I’m really glad to be up here. I love the MX track here, but the woods were really tough single track and when it gets dusty it’s really hard to see.

I’m not used to doing an hour plus so I’m pretty tired. I thought I was in third place the whole time but they told me I finished second so I’m not complaining. Second is pretty awesome for this track. This is only my second WORCS race and I love riding Washougal.

I got a good jump off the start and rode as hard as I could for the rest of the race. I was trying to catch up to Yorba, but it never really happened. I just got a 250F and got off my 2-stroke and I’m still getting used to it. I love the power and the race could’ve only been better for me if I won, but I’m happy with another podium today.