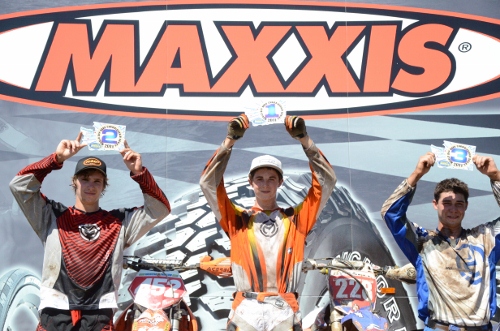 With series point’s leader Corey Gruffunder absent with an injury, Pro 2 standout Justin Seeds was looking forward to an easy weekend in Washington. Seeds gated poorly and had to work his way forward. Meanwhile, the battle up front was between Ricky Russell, Travis Coy, and Ross Neely. This was Coy’s first ride back from serious injury and he was hoping for a victory. After battling each other for the whole hour Russell took the win just three seconds in front of Coy, with Neely taking a well-earned third. Seeds finished sixth and took over the class points lead with 143/2 wins ahead of absent Gruffunder with 130/1 win; Coy is third with 91 points.

I got a good start and then got in the lead with Travis Coy. I tried to ride as fast and consistent as I could without falling. He would gap me in the dust and then I’d catch him on the MX track. He finally made a mistake on the grass track and I got by him and then I knew he’d be in my dust. I’m pretty stoked.

I got a good start and moved up to the lead with Ricky Russell. I led most of it and was able to gap him some in the dust. Then I made a mistake in the grass track and pushed the front end pretty bad and he caught me and took the lead. We both pushed it hard for the last lap but he took it. I’m still pretty happy with a second place on my comeback ride. This is good, I’m happy.
Ross Neely #339 3rd Pro 2

Started off pretty good and had some good battles. I just kept it on two wheels and pushed it forward. I’m pretty happy with third on this track.