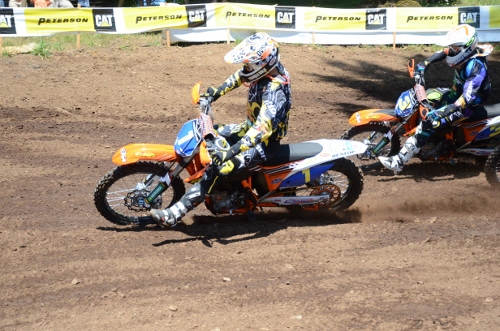 FMF/KTM’s Kurt Caselli won both races at the World Off Road Championship Series (WORCS) to take the overall victory at round seven and extend his points lead for the Championship. The WORCS Series traveled to  legendary Washougal, Washington for round seven where racers enjoyed the National MX track, tight woods trails and a long grass track on the nearly five mile WORCS course.

Caselli took the holeshot in the first race and lead until the final flag. Caselli gated second in race #2 behind teammate Mike Brown. Brown looked as though he was going to run away with the race win, but he lost his rear brakes about 40 minutes into the hour and dropped several positions due to the long pit-stop required to fix the binders. Caselli took over the lead and continued a race-long duel with FMF/Suzuki Off-Road’s Josh Strang. Strang ran close behind Caselli until a late race crash dropped him back out of striking distance.

In the end, Caselli took the overall with a 1-1 sweep of round seven. “It’s been a good weekend for KTM,” said Caselli. “It’s been a crazy year, but the guys who really put in the work are my mechanic and the whole KTM team. The whole race was getting out front and out of the dust, then I rode smart and got lucky with a win.”

Josh Strang took a break from dominating the GNCC Series to take on the riders of the WORCS Series and impressed everyone with a 2-2 finish for second overall. In race #1 Strang gated well and quickly moved into third behind Caselli and Brown. For the next forty minutes Strang and Brown battled wheel-to-wheel until Brown pitted and Strang moved past. Then Strang went after Caselli and though he was able to close the gap, he could not quite catch the fleeting KTM. Then in race #2 Strang once again gated well and found himself in a battle with both Brown and Caselli. Strang got past Brown when Brown pitted for the brake problem, but even though he hounded Caselli for most of the rest of the race he couldn’t get past the #1 KTM.

“Second overall is pretty good for my first WORCS race this year,” said Strang. “I’d like to come to another round and see if I can improve my finish. I’d like to win one of these.”