Posted on June 12, 2011 by Podium Promotions Leave a comment 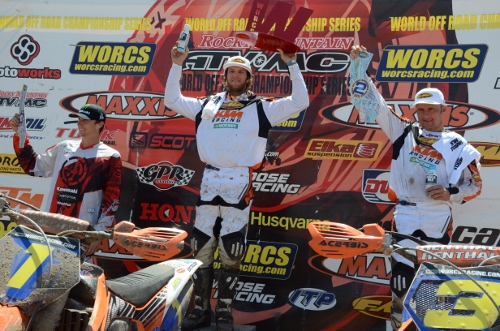 FMF/KTM’s Kurt Caselli is having a phenomenal year. He is dominating every form of off road racing he enters, is the #1 invite to the X-Games Endurocross Race, Co-Captain of the ISDE Trophy Team and he on his way to an unprecedented third career WORCS Championship.

Caselli took his time winning race #1 by waiting until the second lap to take over the lead from Ty Hames who took the holeshot. From that point on Caselli simply pulled away a little more each lap. Monster Energy Kawasaki’s Taylor Robert made a charge after Caselli late in the race, but could not close in on the fleeting KTM450. Caselli took the race #1 win with Robert second and his Monster Energy Kawasaki teammate Justin Soule third. Bobby Garrison rode to fourth place ahead of Ryan Abbatoye in fifth. Mike Brown crashed five times, tore off a radiator, punched a bleeding hole in his hip and the cases of his bike and still brought his KTM home in sixth. Robbie Bell took seventh with Hames finishing a respectable eighth ahead of Destry Abbot and David Pearson.

Race #2 may have been the best of the year. Brown’s mechanic rebuilt his KTM overnight while Mike was in the hospital getting his punctured hip tended. Brown got the holeshot with Robert close behind and Soule battling for the top spot. Caselli was bumped in the first turn and came out mired in mid-pack, a situation which would not last long.

Brown and Robert began a battle that lasted for the first 25 minutes of the hour long WORCS finale. “I was riding the best race of my life,” said Robert later. “I would’ve gone 2-1 and gotten the overall then I clipped a rock and I hit the ground before I knew I was going down.” Sadly, Robert crushed his right wrist in the rock-strewn fall. He was 20 seconds in the lead at the 50 minute mark at the time he pulled off and rode to the ambulance.

Brown took over and put on a charge to hold off the field to take first place in race #2, as Caselli came through the pack for second and Soule scored another third.

“It’s another good day for KTM,” said Caselli on top of the podium for the overall. “This is a real off road race and I want to commend Mike, Justin, and Taylor for riding so well today. I hate to see Taylor get hurt and I hope he will be ready to race again for the next round in Washington in August.”

Brown was happy to take the Race #2 win after his painful ride in race #1. “It was a good day for sure, my hip wasn’t bothering me much,” said Iron Mike. But I think I broke my clutch finger and had to race with my middle finger on the clutch. “It was a little awkward.”

Soule score third overall for the weekend in front of his hometown (Reno) crowd. “I wanted to do well here for my family and friends,” said Soule. I wanted to win, but since I didn’t win it’s good to be on the podium.”

Caselli’s overall victory moved him farther into the WORCs Championship lead with 264/2 wins ahead of Robert with 238/1 win and Garrison with 237/1 win. Brown has 216/1 win ahead of Soule with 192.