Posted on May 29, 2011 by Podium Promotions Leave a comment 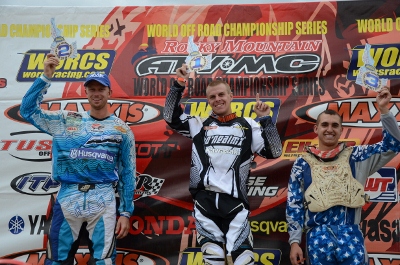 WORCS Pro 2 has been a dogfight all season between Justin Seeds, Corey Gruffunder, Travis Coy and Cody Schafer. At round five it was Seeds turn to take another win less than two seconds ahead of Graffunder after nearly an hour and a half of racing. Third place went to Schafer with Robbie Goolsby fourth and Cooper Hall fifth.

I won another one, but it wasn’t easy. Corey was all over me and I made a few mistakes that almost cost me. I nearly crashed in one of the high speed sections and tacked out my heart rate. But I’ve got to thank GOD and Nathan Woods for watching over me, because I kept it together and got the win.

I was fifth off the line and crashed a couple of times and lost a lot of spots. I was pretty far back and put my head down to salvage what I could. So I cranked off a bunch of fast laps and pushed hard. I caught Justin Seeds right at the end. I could see him and tell he was faster than me on the fast stuff, but I was faster than him in the gnarly stuff. So I tried to stick with him through the fast section and then we got to the rough stuff and it was go time. I tried to make it happen on the MX track and went after him with the old “inside/outside” move and it was working but click-neutral. So my last chance was over the WORCS-Cross section and I hit my shifter on the tires and got another neutral so second place for me.

I like this podium thing. My hand hurts and I’m tired, but I got third.