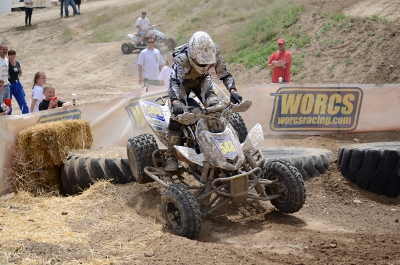 Jeremie Warnia came into WORCS round 5 with the Championship point’s lead, two victories in the first four events, the fastest lap in Pro qualifying, and massive confidence in his own abilities. It almost all went away on the starting line however, as Warnia fried his clutch on the parade lap and his Can-Am mechanics worked feverishly to replace it before the end of the Star spangled Banner. Fortunately for Warnia, and the Idaho fans, they were successful, and Warnia was able to make the drop of the gate with a little time to spare.

The holeshot went to David Haagsma who blistered the long uphill start from the far outside of the gate. It might’ve been a podium performance for Haagsma except that he lost his seat a few turns later and was forced to pit early for a replacement, dropping him out the top three.

The Clay Peaks, course in Payette, Idaho featured many high speed sections. Several elevations changes, a massive-uphill start, a WORCS-Cross section, as well as a giant uphill/downhill with 3 road-cuts across it. It was a fast and challenging course for the all-star field.

Warnia took over before the end of lap one and put on an ATV racing clinic for the next 1 ½ hours as he powered around the long, fast Clay Peaks course. Meanwhile, as Warnia cut lap after lap in the clean air our front, a battle for second ensued between former WORCS Champion Beau Baron and defending WORCS Champion Josh Frederick. Long portions of the course were high speed and dry and dust became the weapon of the day to hold off opponents. Baron, Frederick, Haggsma and Dustin Nelson all did battle on the long 12 minute-plus course.

In the end, Warnia won by a clear margin with Baron taking an impressive second place just ahead of Frederick in third. Haagsma rallied to fourth and Nelson rounded out the top five.

“The race was great,” said Warnia. “I got a good start and pulled into the lead very fast. I found a good speed and we won the race. We worked very hard over the last month and it paid well. It was perfect. I love this kind of track, it is fast and I was lucky to be in front out of the dust.”

Baron was happy to be on the podium again, and still in the hunt for the title. “I was trying to play catch-up and the dust is gnarly, weather you’re trying to make a pass or coming up on a lapper, it’s just hard to see. So I was trying to be as mellow as I could when I couldn’t see and then pin it everywhere else. It worked out, the WORCS-Cross was really tough and the big hills, all became my key deal for closing up and making passes. I’m pumped to be out here and have such a good day today.”

Frederick was also pleased to be on the podium, but he’d rather have been on top of the boxes. “I passed Dustin into second and then I relaxed and was planning my strategy for the race,” said Frederick. “But I relaxed too much in the WORCS-Cross and it bit me and everyone got passed me. Then I spent the rest of the race trying to make up for lost time and positions. It is what it is. I’ve just got to come back and win the next one in Washington.”

His third victory of the season extended Warnia’s points lead to 117/3 wins, with Frederick in second with 107/1 win and Baron in third with 94.