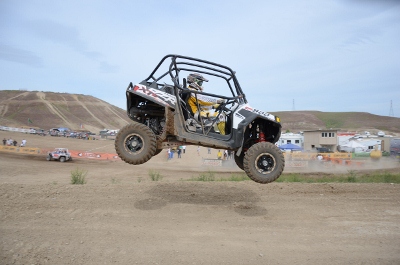 Former WORCS Pro ATV Champion Beau Baron started racing Side-by-Sides at WORCS round 3 where he finished second. Then in round 4, Baron shocked the competition by beating all comers in a race that included William Yokely, Mark Holz, Scott Kiger, and Philip Martin. At WORCS round 5, Baron did it again by winning with a start-to-finish standout performance.

Baron, driving a lightly modified Polaris got the holeshot on the long Clay Peaks, Idaho track and immediately started extending his lead. Baron continued to pull away lap after lap for the entire 50 minutes, driving with the same smooth consistent style he still displays on board his ATV. By the time the checkered flag waved Baron had a better than 50 second lead over second place.

Meanwhile, behind Baron, a great battle ensued over second place. For a while it looked as though Ryan Piplic was going to get the silver medal, but with just 10 minutes to go he broke an axle and ended his drive. Then Scott Kiger held the runner-up slot for a lap, but when the checkered flag came out it was Baron in 1st, Mark Holz 2nd, Kiger 3rd, Philip Martin 4th and William Yokley 5th.

The WORCS Side-by-Side Class 1 Championship is still undecided with Yokley holding 93 points, well ahead of Holz with 76/1 win and Baron coming on strong with 72/2 wins in just three races. Philip Martin who missed the season opener stands fourth in the title chase just behind Baron with 71 points.

WORCS Side by Side Class 2

Todd Seaver powered his way to his second win of the season in WORCS round 5 Side by Side Class 2 racing. Seaver, who won round 3, is coming on strong and vows to stay on the podium for the rest of the season. Jake Greco also had a good drive, finishing 2nd on the tough Clay Peaks course just ahead of Jacob Shaw in 3rd.

The WORCS Championship points chase is very close in Class 2, with Shaw holding a narrow lead with 87 points just one ahead of Greco with 86. Seaver stands 3rd in points with 81/2 wins.

WORCS Side by Side Class 3

The Class 3 Side by Side’s may not be the fastest on the track, but they certainly look like they’re having the most fun. At WORCS round 5 Class 3 was won by David Lytle with Kyla Smith in 2nd and Craig Sinislo in 3rd.  Lytle leads the points chase with 100/1 win, ahead of Smith with 98/1 win and Greg Row with 94/2 wins.