Posted on April 24, 2011 by Podium Promotions Leave a comment 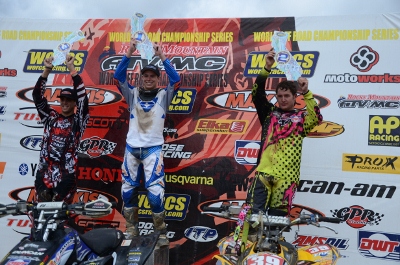 Garrin Fuller started the WORCS Pro-Am season with a third place at round one, but injuries stalled his charge to more podiums. In fact, Fuller missed round three, and round four was his come-back ride. And come-back he did with a decisive victory at the Cahuilla MX Park for WORCS round four.

“I’m really tired,” said Fuller. “My hands are worn out and my knees are worn out, but I feel great! This is my first race back since my injury and I got the bad luck monkey off my back. It was awesome. I got a good start, third, then worked my way up and got the lead and never looked back.  The track is great, like my own track back home so it worked out really well.”

Second place fell to Collins Webster, who has finished either 1st or 2nd all season so far.  “I got a bad start and had to work my way from the back of the pack. I got hung up a few times with some other riders, but came through for second and I’m leaving with a bigger points lead than I came with so I’m happy about that. It all worked out pretty good. I’m going for the Championship by being on the boxes every race.”

Third place went to Keith Johnson for his first Pro-Am podium this season. “It started out good until I got to the Pro section and then I went over the bars and got stuck for a few minutes,” said Johnson. “Then I had to charge forward and make up a lot of time. It was rough coming through everybody. I’m a little sick, flu or something, so I’ve been keeping hydrated. But it got rough coming back to get third.”

After four rounds of WORCS championship racing Webster leads the Pro-Am points chase with 94/2 wins. With Javier Robles Jr in second with 77/1 win tied with Cody Mitchell with 77. Johnson sits fourth with 69