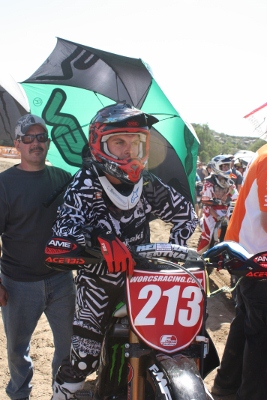 WORCS Pro 2 has been a dogfight all season between Justin Seeds, Corey Gruffunder, Travis Coy and Cody Schafer. At round four it was Gruffunder on his Zip-Ty Husky getting his first win of the season, less than two seconds ahead of Seeds after nearly an hour and a half of racing. Third place went to Schafer with Robbie Goolsby fourth and Travis Coy fifth.

I had a good start and was second right away, so it sucked that I banged that rock on the first lap! I was chasing Seeds on the first lap when we hit the Pro rock section and he opted to go around, so I jumped ‘The Gorge’ and passed him, I hit so hard my hands flew off the bars, but somehow I did not crash! That rocky gulch jump was kind of deceiving… it was a downhill run-up and you had to be careful, but that is how I was able to keep Seeds in check. On my last pass through the pits I read that I had a 13-second lead on the pit board, but by the time we neared the MX track, looked back and Seeds was charging! For the last few minutes we both went hammer-down, bar-to-bar all the way to the finish line. I could hear him coming up beside me in every turn.

I got a really good start and was able to cut my way around and through a lot of guys in the first two turns and then my MX skills paid off on the track and I got into the lead before we hit the off road section. Then I chickened out and didn’t do the Pro section and jump the gorge and Corey got by me. We had a fun race after that and kept it close. I like this course, it was one of the first places I ever podiumed in Pro 2. So I’m happy when we come back here and to be on the podium again.