Posted on March 20, 2011 by Podium Promotions Leave a comment 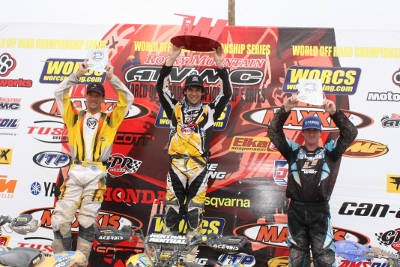 3/20/11, Lake Havasu, AZ: Jeremie “Frenchy” Warnia powered his Can-Am into the lead early in the race at round 3 of the WORCS Series at Lake Havasu and quickly began to gap the field of all-star racers. The last time Warnia took a big lead (at round 1) he basically disappeared and easily dominated the event. But that was not the case at Havasu. Busting his way through the pack was defending WORCS Champion Josh Frederick, who had his eye on getting a victory at the race by the lake. Frederick had his Can-Am performing impossible feats of speed and skill on the brutal, tough, and whooped out sand course at Havasu.

This was clearly the best race of the year so far, as Frederick hunted down and hounded Warnia well into the first hour. Nose-to-tail  the Can-Am duo sprinted over rocks, whoops, and over the water jump, like a pair of NASCAR’s drafting down the straight at Daytona, no quarter asked and non given between the teammates. Frederick made the pass just after the first hour and tried to pull away. But now it was Warnia’s turn to play the role of the Pit-Bull that won’t let go.

Frederick set the fastest lap of the day with a 6:03.697 with Warnia just a tick slower at 6:04.075. Then Warnia took over the lead again and Frederick took up the slot of second in the draft. It came down to the final lap and with Warnia taking the win with Frederick coming across the line literally trying to ram his way into the lead but having to settle for second. Both riders were exhausted, thrilled with their great race and happy to be on the top of the boxes with Warnia a bit happier with the win than Frederick was with the #2 slot.

With three rounds finished Warnia is the points leader with 72/2 wins with Frederick in the second slot with 62. Nelson holds down third in the chase with 57 with Baron fourth in points with 50.

In other ATV Pro news, fan-favorite Tim Shelman severed his left “birdie” finger early in the race when he got the way-ward digit caught between the chain and the countershaft sprocket. Shelman rode to the ambulance, had the finger washed and taped back together, and when told to go straight to the hospital said, “I have to finish the race first.” Shelman re-entered the track and rode one-handed for the next hour finishing 14th. Only then did he take off his gear and allow his wife to take him to the Havasu hospital where the finger was re-attached.

The next round for these ATV Iron-Men is April 22-24 in Cahuilla Creek, Anza, California. Don’t miss it!