Garrison Takes Over at Round 2

Posted on February 27, 2011 by Podium Promotions Leave a comment 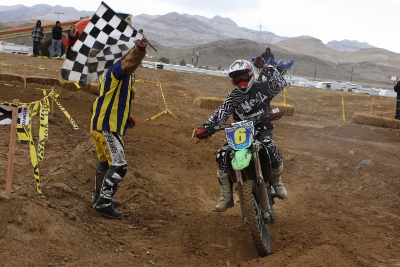 It’s rare anymore when we get to see a true “Privateer” win a major event at the highest levels of Professional motorcycle racing. But, on Saturday February 26, and again Sunday February 27, 2011 that is exactly what happened when Bobby Garrison took the win in the Pro race of WORCS round two.

For race one on Saturday, fan-favorite Destry Abbott took the holeshot. Bobby G gated in the top five and quickly moved into second before the end of the first lap. By this point Destry had taken a tumble and Monster Energy Kawasaki’s Taylor Robert had moved into the lead. Robert has never been easy to catch once he has a lead and this race would be no different. Robert, with Garrison on his tail quickly gapped the field, leaving the trail behind them cold for third place. Garrison continued to haunt Robert, but could not make the pass until lap three when Robert handed him the lead by dumping the bike on the slick asphalt entering the pits. Garrison took the lead, the open track and clean air, and made the most of it by pulling away as fast as his privateer Kawasaki would take him.

With Bobby G well set in first and Robert hunting him in second, a battle for third ensued between Gary Sutherlin, Justin Soule, Mike Brown, Brenden Ritzman and defending WORCS Champion Kurt Caselli.  Caselli, who had gated poorly on the dead-engine start eventually won the final spot on the podium, but could not close on Garrison or Robert before time ran out.

Garrison took the win with Robert close on his rear Maxxis in second, Caselli finished third with Soule in fourth and Brown in fifth.  With Caselli taking the opener and finishing third in Saturday’s race, and Garrison taking third in the opener and winning day one of round two – Caselli and Garrison were tied for the Championship point’s lead going into the race on Sunday.

Race Two was even more amazing than race one. This time former WORCS Champion Mike Brown got the holeshot with Taylor Robert close on his heels. Brown and Robert immediately gapped the field and it looked as though we would see the two of them battle for the rest of the hour. Meanwhile, both Caselli and Garrison were back out of the top five with a host of very fast and determined racers in front of them. But Brown had to slow as his forearms turned to cement on the high speed rough Primm course. Then Robert bobbled and stalled his bike. Now Kyle Summers charged to the front to challenge for the lead, but Summers too would fade as his hands blistered up (hamburger) hanging on in the endless high speed sand whoops.

Then Garrison moved into second and started putting in the fastest laps of the day and closing on Robert. Caselli moved into third, but could not close on Bobby G. In the closing minutes, Garrison took the lead and kept pushing. Robert put in one of his fastest laps on the white flag, hard on the attack to regain the lead. But Garrison would not be denied this weekend as he took moto two for the overall win and the points lead in the WORCS Series.

Robert was close behind in second and Caselli finished third for an identical podium as Saturday’s main event.