Creamer Rises to the Top

Posted on February 27, 2011 by Podium Promotions Leave a comment 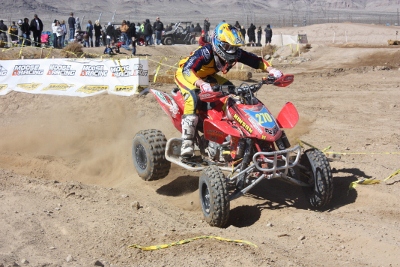 Josh Creamer is a legitimate National Champion, as a Motocross racer. And when a motocrosser tries to make the transition to Off-Road racing there is always a question – a “let’s wait and see if he can hack it” attitude by the fans. Creamer looked good in the opener in Taft, taking a hard-fought fourth place, but until you get on the boxes you’re not a contender. Creamer became a contender for the WORCS Championship this Sunday with a decisive win at WORCS round 2.

Creamer got off to a great start, grabbing the holeshot, but a lapse in concentration cost him the early lead. “I was coming into the hot pit area and I guess I was coming in a little too hot and couldn’t stop in time,” said Creamer.”Hay bales were flying all over the place, but I was lucky and jumped off before my quad hit them and flipped. I was getting back on my machine when Jeff Warnia went by.” Creamer hounded the Frenchman for the next hour of the race and finally made the pass with about 20 minutes left in the event. He never looked back as he went on to take the win.

Warnia, who won the season opener, led for six laps despite pressure from Creamer, who finally got by when “Frenchie” pitted on lap seven. Warnia tried desperately to close the gap, but was unable to make up enough time before reaching the checkered flag. Warnia was happy with second and still holds the points lead. “I was not feeling very good today,” said Warnia. “I am sick, flu, cold, I don’t know, but it was a good race and I am happy with my performance. Next race I will feel better”

Josh Frederick gated poorly on the dead-engine start and had to work his way forward from dead last. Along the way the defending Champion had to battle Beau Baron and Dustin Nelson before earning the final spot on the podium for third. “I am happy with the way I rode and I am happy that I was able to make the podium. I think things will be different at the next round and I will certainly be trying for the win,” said Frederick.