Posted on January 30, 2011 by Podium Promotions Leave a comment 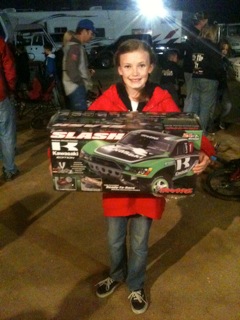 For Round 1 the WORCS Kids program was given the great opportunity to raffle off a Traxxas Kawasaki RC Truck! The age group was limited to 4-14 to keep the program fair and surprisingly there were over 75 kids that entered for the raffle! On Saturday night the kids did a group scavenger hunt and it kept them on their toes about knowing who won the RC truck. It seemed as if there were more kids there than ever before! There were at least 55 kids for the scavenger hunt and a few more joined us after that for the announcement of the winner of the RC Truck. Before announcing the winner, Taylor Johnson and another local racer came up to the front of the crowd while we sang them Happy Birthday (Taylor’s was Friday and the other rider’s was Saturday).

All of the WORCS Kids and their parents sang the two of them happy birthday, and then eagerness began! After all the kids were calm, the question came…“Does anyone remember writing 122 bolts on their piece of paper?” The kids all looked around anxiously to see of anyone was going to raise their hand, and only one hand raised…it was the birthday girl, Taylor Johnson! She guessed the exact number of bolts, which was 122 (the date of the WORCS Kids event). All of the kids cheered for Taylor, showing the true family vibe of WORCS Racing.

Taylor was VERY excited to have won the truck, as was her little sister, Emma, and we even saw a little bit of excitement from her parents, too! The next closest guess was Cameron Snow who guessed 120 bolts. There were a few sad faces around, but that quickly changed when it was announced that we will be raffling off another RC Truck in Primm! That definitely got all of the kids a little more motivated; they are all on their toes and excited for Round 2 in Primm, NV!