Posted on September 26, 2010 by Podium Promotions Leave a comment 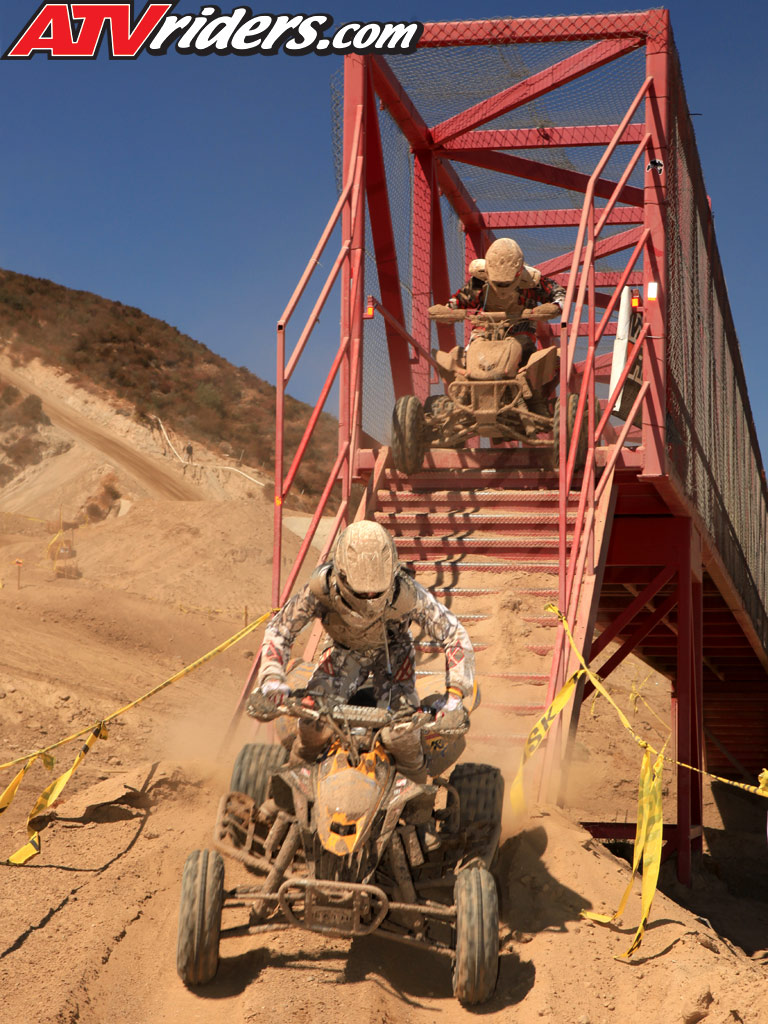 San Bernardino, CA – After a series if incredible events at round eight of the 2010 WORCS series, MCR/Maxxis Tire’s Beau Baron came one step closer to his goal of a repeat championship as he took the Pro ATV win, and took over the points lead, with Yamaha’s Dustin Nelson taking second and MCR/Maxxis Tire’s Josh Row, claiming third.The heat was intense as temperatures soared to nearly 110 degrees before the end of the second lap and took its toll on many racers that only added to the pressure for Josh Frederick and Beau Baron, who were only separated by two points going into this round.

Beau Baron was in a strong third off the start behind Dillon Zimmerman and Dustin Nelson. Zimmerman would fall back and Baron soon worked his way into the number two spot behind Dustin Nelson. Baron pressured Nelson for the entire second lap and took over the lead shortly before the end of lap two. “Dustin made a mistake going up this one hill and I was able to get around him and then I just kind of put it in cruise control because it was so hot and I didn’t want to get too tired,” stated Baron.

Maxxis’ #1 Beau Baron claimed his 2nd straight win & took over the points leads
From there Baron pulled away, with Nelson right behind him and put a four minute lead on the competition. Baron held a solid lead and after eleven laps, Baron took the win and took over the Pro points lead by five points.

“I’m glad I got the win and got ahead in points, but it’s not over yet, so I am going to be training hard because I really want to hang on to the championship!” said Baron, who knows he will have his work cut out for him at Mesquite.

Yamaha’s Dustin Nelson was in a solid second off the line and took the lead away from Dillon Zimmerman through the endurocross section. Nelson led for the first lap, but in lap two, Beau Baron would get past him. “I got a little crossed up in a hill section and Beau was able to get by me. I stayed pretty close to him after that,” said Nelson.

The number 94 Yamaha stayed strong and stayed close to Baron, but he was not able to remount a charge and held second place all the way to the finish line. “After a while the heat was really starting to get to everyone, including me, so I paced myself and took second,” Nelson explained.

Josh Row was again looking strong and consistent as he came off the line in the top five and moved into the number four spot in lap two, where he pressured Dillon Zimmerman. Row waited for his opportunity and got around Zimmerman in lap four. From there, Row held his position for several laps until Josh Frederick caught up and began to challenge him. Row held off Frederick for several minutes before falling back to fourth place but as fate would have it, Row would reclaim third for the final spot on the Pro podium.

Luck was not on Josh Frederick’s side for round eight. In the first lap, Frederick stalled in the offroad-truck section of the track, which put him in last place overall. Frederick had his work cut out for him as he had to work his way through the entire Pro-am and Pro classes.

Frederick made a hard charge and by the mid-way point had made his move into the number four spot, but he was still four minutes behind Beau Baron, who was holding a comfortable lead. Frederick was gaining ground and passed Josh Row for the number three spot, but then disaster struck in lap nine when Frederick ran out of gas.

Frederick pushed his quad directly back to the pits for gas without following the track, but he took off from the pits to continue the race, but because he did not restart at the point where he ran out of gas, his race ended when he ran out of gas, which dropped Frederick from a 4th place finish with 11 laps back to a 8th place finish with just 9 laps.

Can-Am Motoworks’ Dillon Zimmerman grabbed the Pro holeshot, but fell back to fourth place before the end of the first lap. Zimmerman would work back up to third in lap two, but was under pressure from MCR/Maxxis Tire’s Josh Row. Zimmerman eventually fell back to fifth place, but since Zimmerman attempted to carry fuel to his teammate, Josh Frederick, Zimmerman would be disqualified, which also dropped Zimmerman out of the top five in points, but he is just two points behind Mike Cafro.

“I had the holeshot and I was feeling good out there in the lead, but I got hung up in the endure-cross section and that let a couple people get by me,” said Zimmerman.

MCR/Maxxis Tire’s team manager, Mike Cafro was holding his own out on the course. Cafro was in the top ten off the start and quickly worked his way into the number six spot. Cafro would hold that spot for four laps before reaching the checkered flag, and he was bumped up to a fourth place finish with Frederick’s and Zimmerman’s penalty.

Yamaha mounted Justin Waters also looked good as he came on strong to tie a career best 5th place finish after a long battle with Lagzdins.

Andy Lagzdins put in a solid effort as he charged his way up from a 15th place start to the number eight position by the midway point of the race and hold that spot all the way to the finish line, but would be bumped up to 6th place with the other ride penalties.

Tim Shelman held a consistent mid pack position until he was sidelined by a flat tire late in the race, putting him in seventh at the checkered flag, while Jason Fife held strong, despite the heat, to take a 9th place finish followed by John Shafe.

Jeremie Warnia was in attendance for round eight and was looking strong as he was in the top three until lap two, when his brakes went out and he was forced into the pits. Warnia would get back on track, but in the sixth lap, he encountered issues and was done for the day.

With Pro-am Champ David Haagsma making his Pro debut for round eight, but unfortunately, Haagsma was out of the race after four laps with heat exhaustion, but his absence from the Pro-am class, left the class wide open for anyone to take the top spot on the podium since Haagsma had won the last four straight races, and Garrin Fuller, was the lucky one to be on top of the box. This was Fuller’s second win of the season and puts him in a position to end his season in the top five in the points chase.

Javier Robles, Jr. had his best finish this season as he rode a solid and consistent race to take second place and put him in third in points.

Keith Johnson also looked good as he hung on for third, but allowed Javier Robles Jr to close the points gap for the second spot in the championship race to just 7 points heading into the final round.

The Pro points battle will come down to the wire at Mesquite, NV on October 17th as Baron and Frederick battle it out for the 2010 WORCS Championship. After the events that unfolded at round eight, the final round of the 2010 WORCS series will be intense and almost a repeat of last year, as Beau Baron only needs to finish within the top five to claim his second consecutive Pro WORCS Championship, but Josh Frederick still has a shot at it, if he takes the win and Baron finishes outside of the top five. Frederick will have to be on top of his game and will have a tough challenge ahead of him, as Baron has not finished outside of the top four all season.