Posted on September 19, 2010 by Podium Promotions Leave a comment 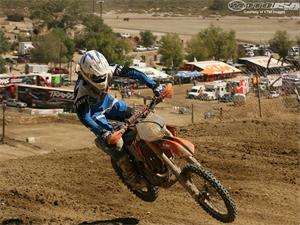 In Round 9 of the 2010 WORCS Championship the KTM squad of Mike Brown and Kurt Caselli landed the top-two steps on the podium at Glen Helen Raceway in Devore, California. Brown took the win ahead of Caselli by just two seconds, with Kawasaki’s Ricky Dietrich rounding out the podium in third.

Brown and Caselli both got excellent starts, and by the first turn Brown was in second with his teammate right behind him. Caselli made quick passes on Brown and holeshot winner, Taylor Roberts, to take the lead position on the third turn. Although Roberts came back and regained the lead on the back half of the track, it was short-lived as Roberts struck a rock and encountered mechanical issues. Caselli assumed the lead, but his teammate proved too much for him to handle, and after some tense moments Brown passed Caselli for the lead.

Brown continued to hold the lead and even managed to establish distance between his teammate. After an hour of racing Brown went to pit for gas, but the stop didn’t take him out of the lead as his crew performed excellently to get him back out quickly. Meanwhile Dietrich was fast approaching behind the two frontrunners, and after pitting for gas the Kawasaki rider was only five seconds behind Caselli.

Shortly after Caselli had to stop for gas, and just as he re-entered the course Dietrich jumped ahead of him. Refusing to give up, Caselli stayed right behind Dietrich and gradually began to close on him. In a chaotic moment, Caselli and Ditrich collided with each other when the KTM rider attempted a pass. Both went down, and Caselli was the quickest getting back into the mix thanks to the electric start on his KTM.

“The crash pretty much took the wind out of my sails,” said Dietrich. “I knew I hit my head pretty good so I didn’t want to do anything stupid and just bring it home in third. I felt like the crash was pretty deliberate, but I got up quickly to make sure I didn’t lose any more positions.”

In speaking about the upcoming final round, Dietrich said: “For me, this last round is for all or nothing. I really don’t have anything to lose at this point and I’m going to be training my butt off over the next month to make sure I have done everything I needed to do for the win.”

The incident allowed Caselli to create a small gap over Dietrich, and it also gave Brown a larger lead up front. Brown eventually took the win and advanced to third in the championship standings while Caselli finished second and increased his point lead. Only one round remains and just six points separate Caselli and Dietrich.

Kawasaki’s Justin Soule continued his strong season by taking fourth at Devore. He had a decent start in fifth, and after some catch-up he squeezed into fourth.

“It was a pretty boring race for me since I didn’t have any one right behind me and I couldn’t see the pack in front of me,” said Soule. “I did get a little dehydrated toward the end, but my lead over fifth was good enough that I could back down my pace and finish fourth.”