Posted on August 8, 2010 by Podium Promotions Leave a comment 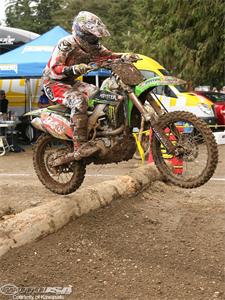 In the eighth round of the 2010 WORCS series Kurt Caselli proved he was just as skilled riding through woods as he is desert terrain. The KTM rider scored his second victory in a row in Washington, beating out Kawasaki’s Ricky Dietrich once again for his third win of the ’10 season.

“The whole team has done a great job this year,” said Caselli. “We’ve been on the podium every race, our worst finish is third and we’re still real close in the Championship. So I needed wins, we had to start winning. We had a meeting before these two Washington rounds and decided we’ve been on the podium and now we need to be on top of the podium. We worked real hard and my mechanic built me the greatest bike I’ve ever ridden.”

Dietrich had hoped to win in front of his family and friends in the state where he grew up, but a mediocre start ruined any chances Dietrich had of making it to the top of the steps.

“I got a bad start and basically had to crash my bike past Soule to get by him.” Dietrich said. “That’s all I’m going to say about that. I thought I had something for Caselli today, but by the time I got into second he was gone and I couldn’t close up on him.”

Securing the final podium position was Kawasaki’s Justin Soule, who earned his third podium finish of the season after progressing through the field.

“I got a decent start,” said Soule. “I was around fifth and I picked my way forward. Brown got the holeshot but crashed off course and we all passed him. He was stalled at the side of the track. I got into second and had a battle with Dietrich. He gapped me for a little while but I started to close on him in the late laps. I put on a charge to try to pass him, but I needed one more lap to get by him. I’m still looking for that first win, but I’m happy to be on the podium again.”

Rounding out the top-five finishers in Washington were FMF/KTM’s Mike Brown and Husqvarna’s Bobby Garrison. Despite getting the holeshot, Brown stalled early in the race and had to fight his way through the field for the majority of the competition.

“I had a tussle over a line with Ritzman and I guess I lost,” said Brown. “My bike stalled and it took a while to get going again. I wanted to ride up front with Kurt, but I lost too much time and it took too long to get through traffic.”

There are just two rounds in the WORCS series left, and Caselii currently leads the championship by only four points ahead of Dietrich.

For Round 9 the series will head to Devore, California on September 17th.