Posted on August 1, 2010 by Podium Promotions Leave a comment 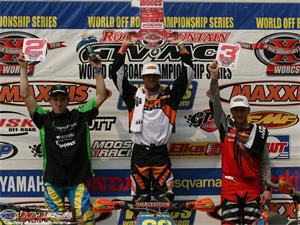 FMF KTM rider Kurt Caselli took his place at the top of the podium on Sunday in Olympia, Washington, taking the victory ahead of Kawasaki’s Ricky Dietrich. Teammate Mike Brown was third and Caselli moves into first place in the championship by a single point. The win was especially important because it was achieved on a KTM 250 XC-F rather than the regular 450 XC-F that Caselli uses.

“Since the racing in Washington is much tighter than we are used to, we thought it would be best to race on a bike that was a little easier to throw around and ride hard through the tight trees,” said Caselli. “Plus, the 250 XC-F still has a big tank and gets better gas mileage than the 450 which allowed us to pit much later than the other racers.”

Destry Abbott managed the holeshot at the start of the contest and held the lead for the majority of the first lap before falling back in the pack. Meanwhile Dietrich began pulling ahead near the end of the first hour via his quick lap times. Caselli stayed right with him, however. The strategy of using the 250 instead of the 450 proved successful as Caselli easily maneuvered around Dietrich for the lead when he went to pit for gas on Lap 5.

“We had a different pit strategy this week which allowed us to stay out about two laps later than everyone else,” Caselli said. “Once I passed Dietrich during his gas stop I was able to get a sizable lead before I needed to stop two laps later.”

As a result Caselli generated an insurmountable lead throughout the race, eventually winning by 51 seconds. Also benefiting from the team’s decision to use the smaller bike was Caselli’s teammate Brown. After starting in around 10th position, Brown passed all the way up to fourth place by the third lap. When RPM/KTM rider Brenden Ritzman, who was running third, went to pit for gas, Brown bypassed the stop and climbed into the final podium position.

Kawasaki’s Justin Soule just missed his third podium finish of the season in fourth, but put in a strong ride behind Brown. Husaberg factory rider, Nathan Woods, earned a hard-fought fifth-place finish after starting the event at the back of the pack. Through his determination the former champion clawed his way to towards the front, and with two laps to go Woods settled into fifth after Brenden Ritzman crashed hard in front of him.