Posted on July 25, 2010 by Podium Promotions Leave a comment 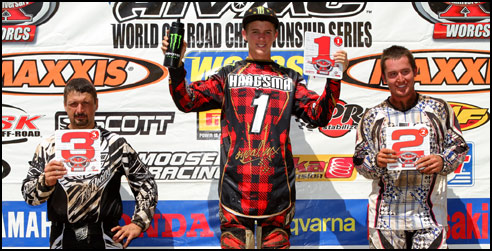 McCleary, WA – There may have been an east coast invasion at round number seven of the 2010 WORCS series, but MCR/Maxxis Tires’ Beau Baron was able to check out and take the Pro ATV win, holding off Suzuki’s Chris Borich who would take second while Can-Am Motoworks’ Josh Frederick would find his way to the podium in third after a heated battle with Can-Am/Warnert Racing’s Adam McGill.

The thermostat was pushing the 90 degree mark at Straddleline ORV Park in western Washington State for Sunday’s main event, which along with a brutally rough track, was a big contributor to rider fatigue that plagued many racers over the weekend.

The Washington round of the WORCS series has become a popular destination for east coast GNCC racers as it coincides perfectly with the GNCC summer break; and this round was no exception as Chris Borich, Adam McGill, Jarrod McClure, and Johnny Gallagher were all on hand to help make a full Pro gate.

Despite the pressure of having some very stiff competition, MCR/Maxxis Tire’s Beau Baron would check out and take the Pro ATV win. As the gate dropped, Baron charged off the line taking second behind Yamaha’s Dustin Nelson, but by the midway point of the first lap, Baron would take the lead away from Nelson and begin to build a very impressive gap between him and the rest of the pack.

Baron was looking smooth and fast as he charged his way through the brutal WORCS X section, and he made it look easy as other riders would get hung up on the obstacles. Baron’s excellent choice of lines allowed him to record the fastest lap time of the race, in lap three, with a time of 10:47.617 and take the Pro win by over a minute ahead of second place.

“One of the best parts of taking this win was that I really wasn’t even that tired when I was done. I’ve been working with Marc Spataro, who set up a great training program for me, and it has helped me a lot. Now I am really looking forward to the last two rounds and I am hoping to take back the points lead,” said Baron, who is now only two points down in the championship points race.

RockStar Suzuki’s Chris Borich was looking good as he got off the line in the number four spot and quickly began pursuing the leaders. Borich picked off both Dustin Nelson and Josh Frederick before the end of the second lap and then set a steady pace. Borich picked up speed later in the race, but it was too late to close the minute plus gap that Baron had gained, forcing Borich to settle for second place on the podium.

“I went out there and took over second pretty early and set a pace. I knew that Baron had a good lead and I tried to close in but it was a little too late to catch him. I mainly just came out here to have some fun and that’s what I did,” said Borich.

Can-Am/Motoworks’ Josh Frederick was looking smooth as ever as he charged off the line in third, but he would soon have his hands full when Adam McGill would catch him and give him a battle for most of the two hour event. Frederick and McGill would swap positions several times, but Frederick would fight back and eventually pull away from McGill to take the final spot on the podium.

“I went out there and gave it my all, so I am happy with my performance, but I really want to take the win at the next round,” said Frederick, who still has a grasp on the Pro points lead.

Can-Am/Warnert Racing’s Adam McGill, who was also out to have a bit of fun, was looking fast and smooth as he came off the line in fifth place. McGill ran into a bit of trouble early in the race when he slid off of a slick bridge crossing and ended up off the track, but he would quickly recover and chase down Josh Frederick. After battling with Frederick for most of the race, McGill would end his day in fourth place.

“It was a rough track, but it was fun. I had a great time out here. I have always wanted to try a WORCS race, so this was a good experience,” said McGill.

Yamaha/Golden West Cycle’s Dustin Nelson, who grabbed the Pro holeshot, ran into a bit of bad luck when he got hung up in the first lap, sending him back to fifth place. Nelson would hold his ground and maintain his fifth place for 10 laps before crossing the finish line.

“I grabbed the holeshot, but then I got hung up out there and the leaders were too far ahead for me to catch them,” said Nelson, who is ranked fourth in pro points after round seven.

MCR/Maxxis Tire’s Josh Row had a consistent race as he would come from ninth place to take a sixth place finish. Row’s solid performances this season have him sitting in the number three position in the Pro points race.

Yet another GNCC racer, Yamaha’s Johnny Gallagher would come on strong despite a nasty crash at the midway point of the race while battling with Josh Row. Gallagher would hang on and take a solid seventh place finish.

“I was going to try and make the pass at this one part of the track and I went up to pass and I hit a tree that was sticking out and I kind of bounced off a stump and went down,” said Gallagher, who was lucky enough to not get hurt.

Roberto Villalobos, who usually runs the ITP Quadcross series, made a hard charge from the back of the pack up to an eighth place finish, while local favorite, Tim Shelman would claim ninth and Yamaha mounted Justin Waters would round out the top ten.

Can-Am/Motoworks’ Dillon Zimmerman was also a victim of the slick bridge crossing, but he was not as fortunate as Adam McGill and it would take him eight minutes before getting unstuck and send him to dead last. Zimmerman would redeem himself and work his way into the number eleven spot before crossing the finish line.

Polaris/Yokley Racing’s Jarrod McClure made his return to the WORCS series and was holding his own, but a miscalculation would have him running out of gas and put him back in twelfth place.

In the Women’s A class, Julie Russell took another win a took one step closer to the championship and now boasts 170 points, giving her a 28 point lead. Lynn Prosser would make a strong effort and claim second, while Sadie bender would take the final spot on the Women’s A podium.

Round number eight of the 2010 WORCS series will head to Glen Helen Raceway on Sept. 24th – 26th and with only two rounds left there will be plenty of excitement as Beau Baron and Josh Frederick battle it out for the Pro points lead.