Posted on June 13, 2010 by Podium Promotions Leave a comment 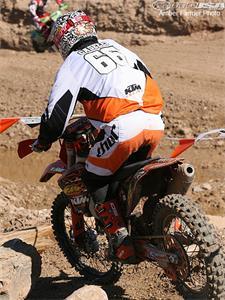 Once again Ricky Dietrich and the Monster Energy Kawasaki team dominated the WORCS series in Cahuilla Creek by taking its third WORCS main event win and its second in a row. Becoming the new Championship leader after his win at Cahuilla, Dietrich had a good start and obtained the lead by Lap 2. The Kawasaki rider sealed the win by gradually pulling away from the pack and in the end crossed the finish line over a minute and a half ahead of KTM’s Kurt Caselli.

Meanwhile Caselli put in an impressive ride aboard his 450 XC-F to take home second overall. Caselli and teammate Mike Brown were off to a good start with Caselli taking the holeshot and Brown taking third in the pack. After the opening lap, however, Caselli couldn’t fend off the Kawasaki’s advances and gave up the lead to Dietrich.

Taking third at Cahuilla creek was Dietrich’s teammate Justin Soule, who made it into third fairly early and retained his position for his second podium of the 2010 season.

Just off the podium in fourth-place was the Husaberg machine of Nathan Woods. After starting from fifth-place Woods made a few mistakes and was pushed back to eighth. Soon afterward, however, he turned up the heat and was able to make two passes due to his team’s efficiency while pitting. On Lap 10 Woods made two more passes to take a fourth overall at Cahuilla – his first top-five result of the season.

Brown was running in third until an off-track excursion pushed him to the back. The KTM rider would spend the rest of the event charging through the field to make up lost ground, and salvaged a fifth-place finish as a result.

One of the major elements at work in the Cahuilla Creek race was a rock jump which few riders were completing. The jump had riders catapulting off the edge of a cliff and onto a rock face which allowed riders to gain about five seconds ahead of the competition. Caselli, Brown, Dietrich and Pearson were the only riders doing the jump that was dangerous yet added a significant advantage.

Battling for the majority of the race were KTM riders Cory Buttrick and David Pearson. With just three laps to go and with Buttrick trailing Pearson they neared the rock jump. Believing he could create a gap by taking the jump, Pearson went for it but came up short and hit the rock face head on. Although he was able to recover, Pearson had to fight back to finish just inside the top-10. Meanwhile, Buttrick was more than satisfied with his ninth-place finish in his first ever WORCS racing event.