Posted on April 18, 2010 by Podium Promotions Leave a comment 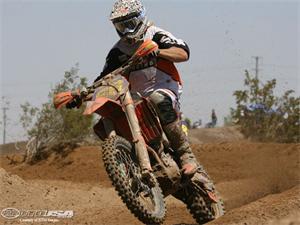 Despite blistering heat and a brutal track, FMF/KTM riders Mike Brown and Kurt Caselli finished first and second, respectively at Round 4 of the WORCS series in Southern California. Taking on a tough track layout as well as a strong group of riders, Brown took his first well-earned win of the 2010 season at Adelanto’s Racetown 395.

“When you’re racing against guys like these, you never know when you’re going to score a win,” said Brown afterwards. “But I’ve won here before and you always like tracks where you’ve won. Everything worked out today for sure, my FMF/KTM performed perfectly and I just kept riding my pace until I got to the front.”

From the start line Brown was the lead KTM rider in fifth, but near the halfway point he began passing his way into third. At the same time Caselli was quickly working his way up through the top-10 riders from a starting position of ninth. After Caselli’s push he was in the top-five before having to pit. Meanwhile, Brown was able to take the lead late into the second hour and keep out of reach until the checkers.

Kawasaki’s team leader, Ricky Dietrich, came in third on his KX450F. He still holds down second in the championship with an 11-point lead over Brown and trails Caselli by only six.

KTM Hare and Hound rider David Kamo made the drive from Idaho to participate in Adelanto. He suffered a bad start but caught up and eventually passed some riders. Riding his own race, he was able to maintain a consistent pace and was able to finish 14th in the foreign race format.

“I struggled a bit here. I am used to being in fifth gear pinned at the desert races, and I never saw fifth gear once today,” remarked Kamo. “But it is always worth the drive to come here for the race experience and the added training.”

Factory Suzuki GNCC racer Josh Strang was another guest rider who had much better luck in the California high desert. Strang, who is currently leading the GNCC XC1 division with four-straight wins, proved he could run with the West Coast riders by finishing a solid seventh place.

Husaberg Factory Racing rider Nathan Woods also had a horrible start, but pulled through with a strong performance, riding to ninth overall.

“I had the worst start,” remarked Woods. “Bobby Garrison and I got our bars tangled and dropped to the end of the pack. I spent the rest of the day trying to pass anyone I could.”

By the end of the opening lap Woods was in 17th and approaching a large group of riders. During the last quarter of the race the factory Husaberg rider was able to turn down fast lap times and pass others as they began to tire. He made his final move into ninth-place by passing Kawasaki’s Destry Abbott.

“My endurance paid off today as I made my move on riders with only a few laps to go. It feels good to finish in the top ten but I am really focused on moving up into the top five.”

This finish places former two-time champ Woods into ninth in the overall point standings. To make the move into the top-five, he’ll have to rediscover some of his former speed and definitely nail some better starts.