Posted on March 28, 2010 by Podium Promotions Leave a comment 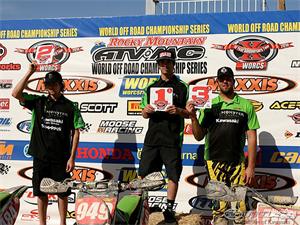 Monster Energy Kawasaki’s team leader, Ricky Dietrich, picked up the victory in the Pro class at Round 3 of the WORCS series. Dietrich, who won this event last year, held off the KTM duo of Mike Brown and Kurt Caselli at the Crazy Horse MX Park in Lake Havasu, Arizona. The KX450F rider from Menifee, California was able to gain valuable ground in the championship race and now sits in second behind Caselli with a four-point gap.

“I’m really comfortable at this track,” said Dietrich. “I obviously really wanted to win after having a tough couple of rounds. I have put a lot into my training program and it’s nice to see it pay off.”

Caselli crashed hard but remounted to charge through the pack. He was unable to catch his teammate, however, finishing two seconds behind Brown. “I had a tough crash today but overall enjoyed this race,” he said. “It was sandy and rough as it usually is over here but it is always fun to come out and race for the large crowd.”

Reigning champion, Brown, is trying to rebound from mechanical troubles at the last round and now resides in fourth behind Justin Soule. Dietrich’s teammate, Soule, came from 20th to fifth at the end of the two-hour race, just behind Kyle Summers on his fourth-place Yamaha.

The stale results continue for former two-time champ Nathan Woods as he struggles to find his former speed aboard his new factory Husaberg FX450. Colton Udall was the highest-placing Honda in seventh and Chris Johnson was the best Suzuki rider with 10th.

Eli Tomac, one of the hottest amateur motocross riders this year, continues to gain experience with a 12th-place finish after posting seventh at the opener in Phoenix.

The Pro 2 class was dominated by Kawasaki riders with an all-green podium from Ryan Abbatoye, Corey Floyd and Brad Goolsby.