Posted on January 31, 2010 by Podium Promotions Leave a comment 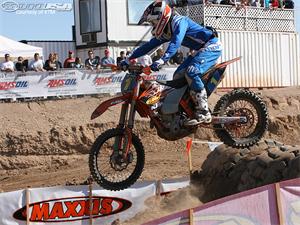 The weather was perfect and the racing action hot at Round 1 of the 2010 WORCS Pro Bike series in Phoenix, Arizona. Yamaha pilots Taylor Roberts and Cole Martinez took the top spots in the Pro Bike and Pro Bike 2 classes and Honda‘s Jessica Patterson was the winner of the Women’s division.

KTMs Mike Brown earned second during the opening round in Phoenix.
Reigning champion Mike Brown got a lucky break when Kyle Summers ran out of gas.
As the gates dropped, Roberts grabbed an early lead and took the holeshot ahead of fellow Yamaha rider Kyle Summers. Tim Weigand was in third on his Honda followed by KTM’s Mike Brown. As the riders neared the gas stop, Brown moved past Weigand taking over third-position.

Roberts managed to hold onto his lead until the checkered flag finishing 11 laps in 2:07:40. Brown inherited second from Summers when his Yamaha ran out of fuel. He would eventually finish in 17th.

Kurt Caselli suffered a bad start to the race and found himself outside of the top-10 as the riders entered the pit stop. However, when the action resumed the KTM ace began a campaign for the front and wound his way through the pack to finish in third.

Weigand held onto his fourth-place spot. The Honda rider was followed by Kawasaki‘s Ricky Dietrich and Destry Abbott, in fifth and sixth, respectively. The second highest-placed Honda was Eli Tomac in seventh followed by Robby Bell on his Kawasaki machine. Colton Udall brought his Honda home in ninth and Kawasaki’s Justin Soule rounded out the top-ten.