Posted on January 24, 2010 by Podium Promotions Leave a comment 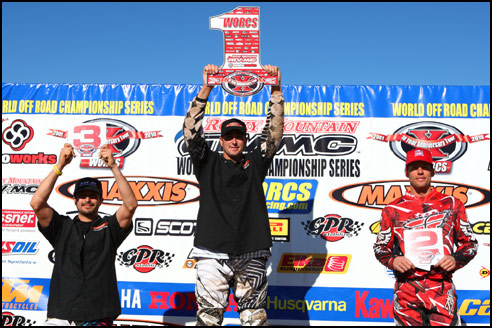 Surprise, AZ – The Opening round of the 10th Anniversary WORCS Series kicked off this weekend in Surprise, Arizona with the defending champion, Beau Baron, claiming the win followed by Can-Am’s Josh Frederick and Maxxis’ Mike Cafro.MCR Racing’s Beau Baron rode a flawless race after battling with Yamaha’s Dustin Nelson for most of the race, but unfortunately for Nelson, his chained derailed, which dropped him out of the race.

Baron kept his head down and charged to claim the win with Can-Am’s Josh Frederick closing the gap on Baron in the final laps, but he experienced issues in the final lap of the race, which left him stalled briefly, but luckily, he was able to get started before losing a position and finished in the second spot.

The tightest battle of the race was between MCR Racing’s Mike Cafro and Privateer, Robbie Mitchell, as the pair battled wheel to wheel for several laps heading to the checkered, but amazingly, Cafro was able to hold off Mitchell to claim the final spot on the Podium.

AMA ATV Motocross racer, Cole Henry, made his debut in the Pro-Am Class, and claimed the class win on his Can-Am DS450 followed by Garrin Fuller and Keith Johnson.